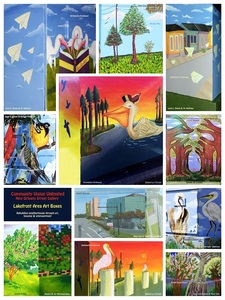 Community Visions Unlimited created the metro New Orleans art box project in 2010 to help eliminate graffiti and restore neighborhoods. Cvu has a neighborhood representative to collaborate on type of art work they wish to see. Cvu artists are notified and renderings are sent to art committee made up of professional artists and neighborhood representative. Then Cvu has volunteers prep the boxes for artists to do art work. The artists are paid $350 and furnished an art kit with all paints. Cvu has helped local artists by promoting and paying them for the work. 300 boxes have been “artified” to date. Cvu found out on June 27 that the city had passed an ordinance that now requires a permit and puts public works in charge of the project. https://nola.gov/onestop/building/street/utility-box-painting/ This is the second time public works has tried to take over this project. https://www.nola.com/opinions/article_c4c0ed59-0929-53c1-bfbe-b6bcea018793.html The first was in 2016. Cvu works in 4 other parishes and none require a permit or public works oversight. Cvu has cooperative endeavor agreements with all other parishes. Cvu has never been required to pay for a permit or have public works decide on the artwork. The city of New Orleans does not pay anything for this project as Cvu raises all funds through donations and grants. Please sign the petition to tell city of New Orleans that you want the project to stay with cvunola.org thanks!

Why is this important?

Community Visions Unlimited has been restoring New Orleans neighborhoods since 1994. They have helped 75 first time homeowners get funding to restore homes to live in and build wealth. Cvu planted the first community garden and has implemented other gardens throughout the city. Cvu organized neighborhood cleanups. In addition to planting over 30 trees in Faubourg St. John area. Cvu assists neighborhoods by writing letters to city officials on blight problems. This has all been done with volunteers and at no cost to the city. In 1999 Cvu received the presidential service award for their work. Also received the mayor’s golden hammer award by mayor Marc Morial special award from the Louisiana legislature.